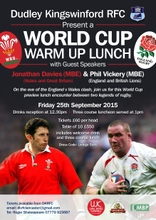 Wall James Chappell will be one of the main sponsors of the sell-out Rugby World Cup "Warm-up" luncheon to be held at Dudley Kingswinford Rugby Club on Friday 25th September.  Over 500 tickets have been sold for this corporate luncheon taking place on the eve of the anticipated England v Wales fixture. The marquee event will have a special "England v Wales" theme and fittingly, the guest speakers will be former England International Phil Vickery and Welsh rugby hero Jonathan Davies.

James Rousell, Partner at Wall James Chappell said "we are delighted to sponsoring this fantastic event on the day before England take on Wales in the Rugby World Cup. To be associated with such a high profile event with such renown speakers such as Phil Vickery and Jonathan Davies is a privilege and something we are very much looking forward to".