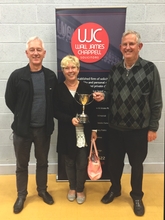 The clear winners of the competition were Diane & Philip Kurbalija who won all of their 7 head to head matches to win by 3 Victory Points. The last match was decisive playing against the then current leaders to win comfortably by 17 - 3. Accomplished Bridge players, Diane and Philip play for the Welsh national open and womens bridge teams respectively and were deserved winners of the overall competition.

The Wall James Chappell sponsorship is helping Worcestershire Bridge raise funds to aquire a new venue to improve facilities in order to attract more playing members, provide better teaching capability and promote the great bridge game to all age groups within the county.