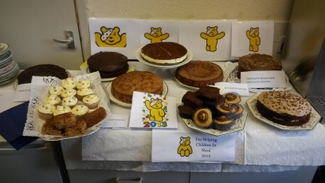 Staff at a Stourbridge firm of Solicitors Wall James Chappell donned their aprons for the second year running for their very own "bake off" to raise money for Children in Need.

Carol Kibbler said that "after the success of the Great British Bake Off we decided to once again hold our own office "bake off". The response from Staff was overhwhelming. The different cakes were sold to other members of Staff and clients of the Firm which helped raise over £150."

The firm will also be holding a mufty day on Friday 15th November 2013 to raise more money for Children in Need.