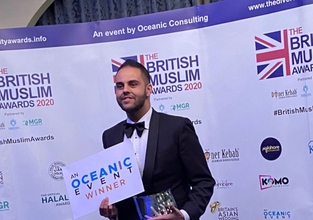 Wall James Chappell are delighted to announce that Partner and Head of Dispute Resolution, Vic Younis won the Rising Star in Law award at the British Muslim Awards 2020.

The Rising Star in Law award celebrates the achievement of a legal professional  who has demonstrated an exceptional standard of work, knowledge and already achieved significant milestones in their career.

The purpose of these awards, which have been held over the last 8 Years is to recognise, celebrate and promote the success, achievements and contributions of Britain's Muslim individuals, groups and businesses and highlights the significant role Muslims play in contributing to a better Great Britain.

Vic commented "It was a privilege to simply be nominated for the award, so to go on to win it is truly an honour".

James Rousell, Senior Partner, commented "As a firm we are all thrilled and delighted Vic won and look forward to sharing in his continued success and growth.