G-RMAA officially flies into the Midlands. 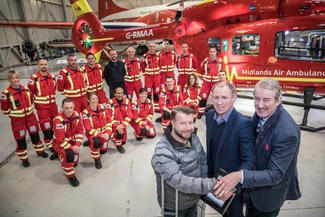 The new helicopter will undertake an average of three air ambulance missions every day and will provide a great number of benefits to patient care within the Midlands. It travels greater distances without the need for refuelling and enables the aircrew to respond even faster due to increased speed capability. The larger interior means additional aircrew can be flown to major incident scenes, and further medical equipment can be carried on board to treat more complex emergencies.

Jon Cottrell further stated “The charity are extremely grateful for the continued support of Wall James Chappell and we were delighted that they were in attendance, we look forward to working with them for many years to come.”

What is not widely known is that Midlands Air Ambulance Charity receives no Government or National Lottery funding. Each Midlands Air Ambulance Charity mission costs £2,500 and in excess of £9 million is needed each year to keep its three air ambulances operational, which is donated entirely by the public and local businesses, with four in ten of those funded by Gifts in Wills.

Wall James Chappell are proud sponsors of the free will writing service provided by the charity.