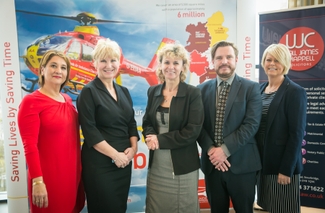 The luncheon is an exclusive event best placed for CEOs, managing directors, senior managers and our corporate partners and is designed to facilitate high-level networking to create long-term partnerships. The luncheon includes a two course meal, a drink, and the opportunity to network with over 100 fellow business leaders.

Wall James Chappell have supported Midlands Air Ambulance as their charity of choice for several years. The firm recently sponsored  the Charity`s Corporate Networking event in Chateau Impney Hotel in Worcestershire. MAAC’s Sofia Voutianitis said: “We felt privileged to bring together so many generous supporters of the Midlands Air Ambulance Charity, particularly in such a wonderful venue with such delicious food. Our guests made many exciting new connections during the afternoon, as well as discussing fresh ideas with old friends.”

James Rousell from Wall James Chappell said: “We’ve been proud supporters of Midlands Air Ambulance for many years now. Quality networking events such as this are an opportunity to meet like-minded companies from the region and to help other businesses forge valuable partnerships that help the Midlands’ corporate scene flourish.”